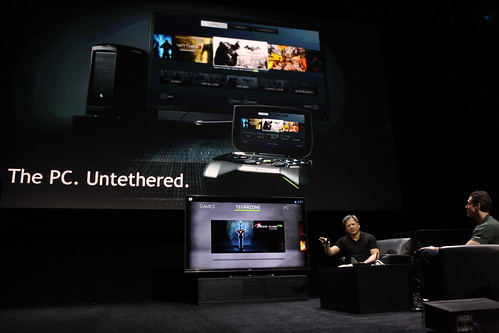 NVIDIA has just revealed a new handheld gaming system called Project Shield at CES 2013 and they are saying it’s designed for gamers who yearn to play when, where and how they want. This new portable games console packs a few surprises like a brand new NVIDIA Tegra 4 chipset, 5″ 720p display, wireless, mini-HDMI output, Google’s Android Jelly Bean operating system and the ability to play games streamed from a NVIDIA enabled PC.

At the center of NVIDIA’s Project SHIELD is their brand new NVIDIA Tegra 4 mobile processor, which delivers enormous power from its custom 72-core GeForce GPU and the first quad-core application of ARM’s latest generation CPU core, the Cortex-A15. These, combined with its battery-saver core and energy-saving PRISM 2 technology, deliver hours of unparalleled gameplay on a single charge.

Deep, rich audio is critical for a great gaming experience. And Project SHIELD brings fidelity and dynamic range unseen before on a portable device, through its custom, bass reflex, tuned port audio system – with twice the low-frequency output of high-end laptops.

Windows and Android are the world’s most successful computing platforms, with massive ecosystems of system and software developers. While not specifically designed for gaming, both open platforms have drawn gamers by the millions. What will set Project SHIELD apart from any other handheld gaming system is that it is designed to allow them to enjoy Android and Windows games in a new, exciting way. Project SHIELD can instantly download Android games, including Android-optimized titles available on NVIDIA’s TegraZone™ game store, which has already delivered more than 6 million downloads to gamers. It can also be used as a wireless game receiver to a nearby PC equipped with an NVIDIA GeForce GTX 650 GPU or higher.

Project SHIELD flawlessly plays both Android and PC titles. As a pure Android device, it gives access to any game on Google Play. And as a wireless receiver and controller, it can stream games from a PC powered by NVIDIA® GeForce® GTX GPUs, accessing titles on its STEAM game library from anywhere in the home.

Project SHIELD can also access Android apps such as Hulu, Netflix and Slacker Radio, so users can enjoy their movies and music anywhere without expensive, clumsy wired or wireless speakers.

NVIDIA is yet to announce a price for getting your hands on Project SHIELD but it is expected to be available in Q2 of this year.

You can see more of Project SHIELD at NVIDIA’s official page or watch the video below.

Works as a I.T. Server Administrator. Loves to know the inner workings of anything with a computer, if it can be modded, it will be tried. Known for pushing things to their limit and then some more. Believes Jedi is a real religion and that penguins will one day rule the world.Qualifications: CompTIA A+ | CompTIA Network+ | MCSA - Windows Server 2008 | MTA - Server Administrator

View all articles by Ben Thomas