Nokia organised a tweetup at the Nokia Concept Store on Church Street, Bangalore. The event was a showcase for two developers, Eterno Infotech, the makers of NewsHunt and Neev Tech, the makers of Touch2Sparkle. The developers showcased their applications and spoke about their plans for future developments, in terms of the their current and upcoming applications. They also helped all the visitors at the store download the applications from the Ovi Store.

We’ve got more about the featured applications at this tweet up, and will have the low-down on them in the subsequent posts, so stay tuned. 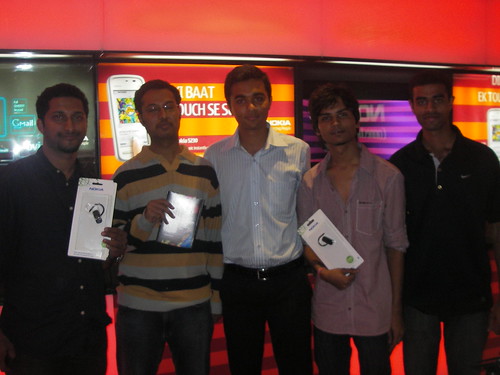 Along with the application demos, the store also had a giveaway for three lucky people who attended the tweetup. One lucky person got a Nokia 5230 while two other lucky winners got Nokia Bluetooth Headsets.

We’ve got more pictures of the event at our Flickr sets. Click here to see the pics.